Everyone should read this. It helps calm the mind and explore one’s soul on a more expansive view. The article is sort of like indifference combined with knowledge. Interesting and thought provoking I really enjoyed this. 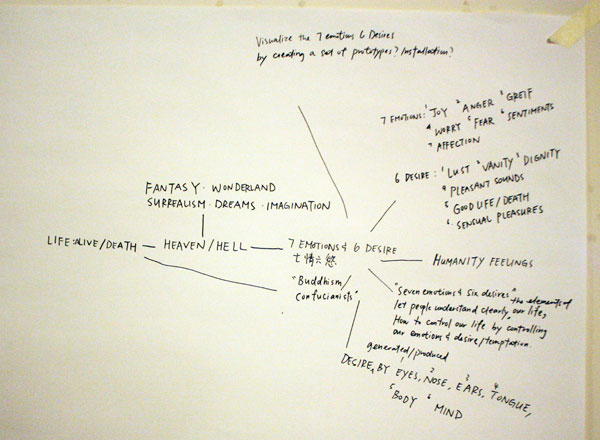 After I did the brainstorming of the 4 ideas of Fantasy/Dreams, Affairs/Obsession, Death and Sex.

I realise they are actually the elements of Buddhism and Confucianists’ The Seven Emotions and Six Desires.

I am very interested about this deep idea and concept about Humanity. However, it is very big and  general…

How can I develop and divide it into three projects???

The Seed of Emotions

Original translated part is in { }. I put it there to show how much i changed from the original text. I cannot read japanese so my editing may severely change the outcome thus i’d like you to know that. also in my edited sections i put ( ) to show what was there previously or what i think it should change into.

{After finishing the battle with Cashel, I joined Clotho.}

After finishing the battle with Cashel, I joined up with Clotho.

{“Clotho seems to be safe”}

”Clotho seems to be safe”

{I advance to the place where Gimuru which is last one of group of 3 falls down to. Gimuru seemed to already cease to breathe.}

I advanced to the place where Gimuru was; the last one out of the group of 3 to fall down. He (Gimuru) seemed to already cease breathing.

{“The valuable thing…… the sword of Cashel? Clotho, absorb the corpse. And take out also an MP recovery potion.}

”The valuable object (thing/item?) …… the sword of Cashel? Clotho absorb the corpse, and take out a Mp recovery potion as well.”

{When appraised, it has been understood, the sword of Cashel is class C weapon “[Mithril Sword]”. Though there is no special effect, the offensive power of the sword is high and considerably good. I will have Clotho keep it. By the way magic robe and cane of jade that I is equipped is class E. In the place where a low request was achieved ten times, there is no reason that can buy quality goods(TLN:doesn’t makes much sense for me).}

When appraised the sword of Cashel turned out to be a Class C weapon ”[Mithril Sword]”. Though there are no special effects, the offensive power of the sword is high and considerably good. I will have Clotho keep (store?) it. By the way the magic robe and the cane of jade that I equipped is of class E. (I don’t really get the next part T.T) Since i completed ten times (a huge amount of) the amount of low ranked requests I can buy good quality items.

{“I have various things to say to Cashel, you have not fought against a strong man that much too?”}

I had a various amount of things to say to Cashel. ”You have not fought against a lot of strong opponents, huh.” (<- that was a bit confusing so i changed it a lot)

“I will fight from now on.”

{So, even here is a skirmish. I confirmed it with appraisal from the gap of the door, after this I have to fight the old castle of evil spirit’s black soul knight – a monster that is higher rank than us.}

Well, there was this problem as well. I confirmed it (the monster?) with appraisal from the gap of the door. After this I have (had?) to fight the evil spirit’s black soul knight – a monster that is of higher rank than us.

Darkness attribute reduction by half

”What do you say? I would like to be your friend!” (I don’t really know if this is formal or casual so please change it to your needs)

{“There is not the fragment of the feeling of strain, too”} (who is saying this?)

”There isn’t any feeling of hostility (<?) either.”

{Let’s leave Tsukkomi of Merufi-na, the other party is a named monster. It is name durability(TLN: Gerard?). According to the information that I investigated beforehand, named monsters are intelligent, it is said that there is an individual that speaks the human speech, too. The typical one is the dragon kind. It is also written that humanoids have high probability to speak.}

Let’s just leave Tsukkomi to Merufina. The other party is a named monster. It’s name, (means?) durability, Gerard. (I am confused about this point as well so I just left it as this) According to the information that I investigated (appraised) beforehand, named monsters are intelligent. It’s said that there are some who speaks human speech, too. The typical ones are the dragon kind. It is also written that humanoids have a high probability in speaking as well.

{“Contract with the intelligent monster is not tricky. Only not weakening, but also recognize you”}

”Contracting with this intelligent monster is easy to do, not only with weakening it but it also recognizes you”

{I need to be recognized? A war does not seem to get off only with victory unconditionally(TLN: even if he won by any means, something like that).}

So, I need to be recognized? Well as they say, a war doesn’t seem to only be won with victory.

{“It is normal to trainers to raise low-ranked monster. Suddenly trying to make a boss into a subordinate.”}

”It is normal for trainers to raise low-ranked monsters. Suddenly trying to make a boss into a subordinate” (confusing, this part)

{“Is it the same as evolve Clotho from the blue slime?”}

”Is it the same as with the evolution Clotho performed from the blue slime?”

{“The evolution of Clotho is exceptional … … Is it all right by the recognition?”}

”The evolution of Clotho is exceptional … … (I don’t understand this part as well T.T) Is it all right be the recognition?”

”Well, we won’t know whether if it’ll work if we don’t try.”

{I turn toward Clotho.}

I turned towards Clotho.

{“Clotho, the black soul knight for me, is the first powerful enemy for you. Do not be stingy.” (TLN: sounds like don’t hold back or something)}

”Clotho, the black soul knight for me and for you is the first powerful enemy we’ve encountered. Don’t hold back.”

{I piled up reinforcement magic to me and Clotho. With my high level of magical power the effect might last a little bit longer. If it is over; completely. I let Clotho wait in the rear and open the large door. Black soul knight’s attire is exactly the same as earlier. A large sword of the jet black is thrust into ground, and in imposing stance as protecting the throne at the back(I didn’t get this part). The state not to shake is like the genuine knight not a monster}

I buffed Clotho and I with reinforcement magic. With my high level magic power the effects might last a little bit longer. If it runs out, it’s over. I let Clotho wait in the rear and opened the large door. Black soul knight’s attire is exactly the same as earlier. A large sword of jet black is thrust into the ground, and in an imposing stance as if protecting the throne at the back. This opponent had an aura of a genuine knight not a monster (???<).

{I walk to throne slowly while staring on the black soul knight. In the area where I came to until the middle of the room, a quiet voice just sounded.}

I walked slowly to the throne while staring at the black soul knight. I was approaching the middle of the room when a quiet voice sounded.

”What have you come here for.”

{I was surprised at an unexpectedly dandy voice a little. It might be reflected on a face without my skill of the courage.}

I was a little surprised at how unexpectedly dandy the voice was. But it didn’t show on my face because of the skill [courage].

{“Did you finally talk? I was worried because you didn’t moved until I walked”}

”Did you finally choose to talk? I was worried because you didn’t move at all until I walked”

{“Unnecessary care. A lost child came in the deepest part of the castle, state your business”}

”Unnecessary talk. A lost child came from the deepest part of the castle, state your business”

{“For your subjugation… is what supposed to be my purpose but I changed my mind. I am summoner Kelvin, want to make contract with you.”}

”For your subjugation… was supposed to be my purpose but I’ve changed my mind. I am summoner Kelvin, and I want to make a contract with you.”

{The black soul knight hardens for an instant. (TLN: stiffen?)}

The black soul knight stiffens for a moment.

{“…you bastard want me to have contract with and follow you?”}

”…you bastard, you want me to have a contract with you and follow you?”

{Ah, yabe. The black soul knight shakes a body little by little. Have I angered him?}

Ah, yabe (not good/shit). The black soul knight’s body trembles slightly. Have I angered him?

{Suddenly, The black soul knight changed completely with a previous image and burst into laughter as if I discharged all the crowded things not to save until now. Naturally I am dumbfounded in my mind.}

Suddenly, The black soul knight changes completely from the previous image and bursts into laughter as if exploding all of it’s stored emotions at that very moment. Naturally, in my mind I’m dumbfounded.

{“Stop, stop it, such a formal speech. However boy/youngster, even though too much bloodlust was directed to you, you remained calm! You want to form a contract, you’re really interesting.”}

“Stop, stop it, such formal speech. However boy, even though much bloodlust was directed at you, you remained calm! You want to form a contract, you’re really interesting.”

{In a finger snap. The proud knight’s image vanished.}

In a finger snap. The proud knight’s image vanished.

TL please fix my errors if you find any because idk any of the japanese culture related stuff. my thoughts are in ( ) so look through it. tell me if the way i edit is annoying.

This is your very first post. Click the Edit link to modify or delete it, or start a new post. If you like, use this post to tell readers why you started this blog and what you plan to do with it.